History of Our Hospital

In 2002, the hospital celebrated 100 years of service to the community of Cresco, Iowa. Historical articles are researched, written, and very generously submitted by Jerry Lybbert, 2002 Vice President for the Hospital Auxiliary.

Dr. George Kessel was born in Winneshiek County to a pioneer family. He entered a family of three children along with his twin sister. The family attended country school and upon graduation, he was sent to Breckenridge Institute in Decorah, Iowa. Upon completion of the two-year course, his father offered the choice of 160 acres or college education. He chose a college with the idea of becoming a minister. At Grinnell, Iowa, he stayed with a physician, Dr. Elbert Clark, earning his room and board as a handyman. Through this association, he became interested in the medical profession. He received his BA and MA from Grinnell College, his MD from Rush Medical Institute, and went on to the University of Vienna and the clinics of Paris and London. He did much research in the Pasteur Technique of sterilization. In 1914, he was made a Fellow of the American College of Surgeons.

Dr. Kessel married Lila Truit in 1886, who was a classmate at Grinnell. They lived in Decorah for a few months before moving to Cresco. With encouragement and professional help from his friends, Drs. William and Charles Mayo founded the first hospital in Northeast Iowa. This was known as the Kessel Hospital. Old records reveal that many people from the outlying counties came for their medical attention. Dr. Kessel remained an active member of the staff at St. Joseph’s Mercy Hospital until his death on January 29, 1945.

His professional organizations included the American Medical Association, Iowa State and Tristate Medical Societies, Interstate Post-Graduate Assembly, and the Board of Governors of the Gorgas Memorial Institute. He wrote articles for newspapers and was published in several medical journals.

Dr. George Kessel served the City of Cresco as mayor, as a member of the school board, and for many years as the president of the library board. He also donated land to the city for a park, now known as Kessel Park.

Dr. George Kessel opened Cresco’s first hospital in 1902. Dr. Kessel purchased the property from Mrs. August Beadle, which included 17 acres and the house to be used as the hospital. With his own money, Dr. Kessel converted the home into a hospital. 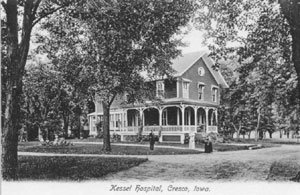 By 1908, the Kessel Hospital was unable to take care of all the cases that applied for admission. (Other doctors’ patients could only be admitted by Dr. Kessel.) The community began to see a need for a larger hospital. Dr. Kessel agreed to turn over his hospital only if a first-class and up-to-date facility could be built and maintained. The Sisters of Mercy were petitioned to take over and supervise the hospital.

Dr. Kessel petitioned the Sisters of Mercy to supervise a new hospital. The one stipulation was to establish a training school for nurses. The school started in 1910 with an enrollment of six ladies. Dr. Kessel had quite a lot of input in the nurses’ training. He was especially concerned with the rules of sterile technique.

The old hospital was used as the training school for academic studies and as sleeping quarters for the nurse trainees. As you would expect, the discipline was very strict. There was limited time away from the hospital with an early curfew. Because of insufficient clinical material for teaching, the school was forced to close in 1927.

The building then was remodeled in 1928 for use as a graduate nurses’ home and a chapel was added. The nurses received room and board with a $55 a month salary. One of the reasons for the housing arrangement was the twelve-hour shifts, and the nurses were available for calls when emergencies, surgeries, and deliveries occurred. The nurses’ dorm was discontinued after the hospital had a fire on February 14, 1943.

In 1978, after 50 years, the hospital again became a teaching hospital. It was made available to the nursing students from Northeast Iowa Community College. The Education Department has grown with telecasts from NICC and other institutions to bring continuing education to the hospital personnel.

Dr. Kessel would be astonished and very proud of the quality of the nurses at Regional Health Services of Howard County.

In 1976, the Ambulance Service was developed by the hospital with certified EMTs. For faster transportation of emergency patients, helicopter services were started in 1985.

In 1978 mobile ultrasound and nuclear medicine services became available. CT scan arrived in 1985. The hospital will very soon have its own CT scanner.

The start of outreach services began in 1981 with a urologist. There are now specialists with various disciplines in the Outpatient Department many days each month.

Respiratory Therapy was added to the many departments of the hospital in 1983. The EKGs became the responsibility of this department.

The Cardiac Rehabilitation Department was added in 1989 to help the numerous cardiac patients on the road to recovery.

Over the years, there have been a number of new procedures, equipment, and personnel made available to increase the services the hospital has to offer. New ones will be added as the needs of the community increase.

History of the Hospital Auxiliary

St. Joseph Mercy Hospital had a small auxiliary of 15 members. These ladies met in various homes each month. They were called the “Hospital Sewing Unit”. Responsibilities were to mend and sew articles as requested by the Sisters of Mercy. This group continued until the hospital became Howard County Hospital.

In 1974, the hospital was obtained by Howard County from the Sisters of Mercy. One of the goals of the first administrator, Dwight Daniels, was to establish a hospital auxiliary. The auxiliary would exist for the sole purpose of furthering the goals of the hospital by recruiting volunteers, raising funds, and enhancing public relations. The auxiliary was formed in September 1974, with the election of officers in November 1974. Over the years, the purpose of the auxiliary has remained but has increased as hospital services expanded.

The Pink Ladies were organized in 1975 as in-house helpers to the hospital staff and patients. They also are callers for the Teleconcern Program on a daily basis.

The Male Escorts was started in 1996. Their purpose is to help outpatients by taking the patient to various departments, assisting with wheelchairs, and doing errands as requested by the outpatient clerk.

To further public relations, the auxiliary has had booths at the Howard County Fair and Farm and Home Show. It also assists at the annual cardiac risk profile by registering and urging the public to have the screening. The bloodmobile, which arrives twice a year, is another project. In 1981, a scholarship fund was established for individuals wishing to go into a medical professional or to pursue further education in their medical careers. The Arts and Crafts group makes patient tray decorations for various holidays. The hospital auxiliary has the annual poster contest and also displays student artwork. These are some of the many ways the auxiliary and individuals help to promote the hospital.

The fundraising comes from a number of events. Each event has the monies designated for a particular item as needed by the hospital to update equipment and add new items for better medical care of the patients.

Some of the fundraising events are the golf tournament, quilt auction, Christmas cookie and candy sale, omelet breakfast, book sale, gift case, bakeless bake sale, Lovelight, and coffees. Through the years, approximately $400,000 has been raised for equipment purchases.

The first quilt auction took place in 1977, which was started by Irene Erickson. Howard County churches, women’s clubs, and individuals donate the quilts each year. To date, quilt auctions have brought in over $418,000 to fund hospital projects.

The Auxiliary response to help with hospital services and patient care is shown by its members and the support of many businesses and individuals in the community.